You should know that by now, Brother Peter. I feel like Gregory did an impeccable job making it feel like it was but that things were basically the same as far as young love, fear, and religions clashing while prejudices reign. The main thing was how long it took me to finish it.


Before the plot really started unfolding , it was hard for me to keep picking it up. Isolde was annoying at times, in the way she prescribes to all the ideals that men have set upon women and how she let her jealousy goad her into a fight with Ishraq was disappointing.

Stormbringers continues the journey of Brothers Luca and Peter as they investigate mysterious events occurring all around Europe for the Pope, in the hopes of discovering if the end of the world is nigh. Travelling with them are Lady Isolde and her companion Ishraq.

I think Philippa Gregory has delivered an admirable sequel to Changeling , building upon the foundation she laid in the previous book and progressing the characters deeper into the mysteries of the time they live in. I love that the characters grow so much throughout this book - especially Ishraq and Frieze. The more these five spend time with one another, the more they learn about each other and the more their own personal views and prejudices are challenged.

In Stormbringers , the foundation is laid for Ishraq's impending crisis of identity as a Muslim maid to a Christian Lady in the time of the expansion of the Ottoman Empire and the threat they pose to Christendom. I think the tension between them is cleverly woven, and would love to see how it pans out in later novels. I think the revelations at the end f this book will play a large role in the dynamics of the little group as time goes on. All the action is set in a tiny coastal town, and there are prophets, natural disasters, witch trials and a captain of a slaver-ship to keep readers entertained.

The book feels a lot longer than its pages, but I never found it lagging or boring. However, this book isn't really about the prophets, natural disasters or witch trials, it's about the impact of these events on the devout Christian population of the time. It focuses on the way these people, lacking the scientific knowledge we have now, turn to portents and magic to explain the things around them.

The book also looks at the religious conviction of Brother Peter, pitted against Luca's uncertainty, and the way that horrible things can be done in the name of religion. 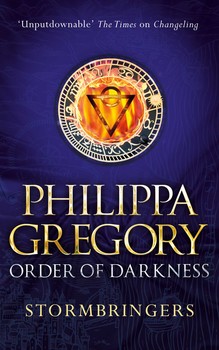 Again, it is Ishraq, as the heretic in the party, who questions and challenges these things. In some ways, it feels like the plot hangs on her character - she's often the voice of reason, with modern ideas of religious freedom and gender equality. There are a few things I didn't like about the novel.

The first is that, although it is an exciting book, the overall plot progression is basically nonexistent. It's obvious that the Order of Darkness series is going to be long. The second is the author's ignorance on the Islamic religion and Middle Eastern culture. Although forgivable in her sheltered Christian protagonists who are prone to superstition and look for all their answers in the Bible - it's unacceptable in the few Muslim characters we meet. They use phrases like Insha Allah incorrectly, at completely the wrong time, and seem to be shallowly versed in their own religion.

All the best, trademark aspects of Gregory's writing have been translated into this YA novel, and I look forward to continuing Luca and Isolde's journey in the coming sequels. A copy of this book was provided by the publisher for review. You can read more of my reviews at Speculating on SpecFic. Feb 15, Chapter by Chapter rated it really liked it. I was so excited to be able to get back into this world created by author, Philippa Gregory.

This guy was constantly making me laugh out loud and giggle. The five travelling companions are continuing their journey together, and the attraction between Isolde and Luca are becoming more and more obvious. I, personally, love the start crossed lovers theme happening here…where I was so excited to be able to get back into this world created by author, Philippa Gregory.

I, personally, love the start crossed lovers theme happening here…where Isolde wants so much to have Luca as her own, and where they can profess their love to each other, but Luca is on his way to taking his vows into priesthood…which is a huge obstacle. And Luca is having a difficult time controlling his thoughts and desires towards Isolde.

After having received another quest from the lord of The Order of Darkness, their travels take them to a fishing town where an inquiry is in order. It seems that Luca and his fellow travelers are not the only ones who have stopped into town to rest. A crusade has come into town…a crusade of children who is being led by one they call Johann the Good, who is merely a child himself; 16 years old.

Johann believes that God speaks to him and has sent him on a quest to Palestine where he and a crusade of children will face the enemy and change the war, and where miracles will be witnessed. After hearing his very convincing sermon, Luca and the crew decide that they, too, will follow Johann to Jerusalem and bear witness to the miracles he tells. But what was supposed to be believed to be a miracle turns into a tragedy, and the lives of everyone involved takes a dramatic turn for the worse. Friendships are tested, and rumors of Stormbringers working their magic has made things rather difficult for our group of travelers.

If I were to compare book 1 with book 2, I would have to say that book 2 is the better of the 2 so far! I felt quite a bit of emotion in this book due to the events that transpire in the pages. It was heartbreaking to witness the pain that some of these characters go through because of something that I am so not going to tell you. There was a lot of action in this installment as well! It was go…go…go! Once one event finishes, something else creeps its way into the story and I was hooked all over again!

I was reeling wondering what was real, and what was set up to be portrayed as truth… I also loved that a little bit more about The Order of Darkness is discussed in the book, and a little snippet to another order that I am sooooo hoping will be a huge part of the this series…the Order of Assassins… How awesome would that be?

How could I not help but squee just a little bit! I totally recommend these reads to those who love reading about quests and epic journeys, are looking for characters that will not easily be forgotten, and want to be lost in a world of dark secrets and explainable occurrences. Apr 09, Grace Fonseca rated it really liked it. What an incredible book that never let up at all. After reading Changeling, I had high expectations that the sequel would be just as thrilling as Changeling and it was in some ways a lot better.

The story and pacing seemed to be much more crisp and faster. Being that this was the second book in a quartet, means that the characters have to be even stronger than they were in the first book. What I like about this book is that there are very strong Christian elements and themes to this book. I felt What an incredible book that never let up at all.

I felt that the first book portrayed that well, but this one does it to an even greater extent. There was a pilgrimage and in Christianity this is one of the greatest themes in books that have to deal with Christianity during this century. Johann and the children pilgrimage was one that you would often hear about.

You really come to believe in what Johann is doing. He believes he has been called by God. What Johann reveals during his sermon were things that our four main characters have never told anyone about themselves or their pasts. Yet he speaks to something in them that makes them want to join him.

Yet things go terribly wrong in a major way. It was like all hell broke loose. What happens is one of the worst things imaginable. People die from a flood. At first it appears that something miraculous is happening and then tragedy strikes right at the core of our foursome. Tragedy is not something I was expecting. It was like a gut punch to me and both Isolde and her friend find themselves the victims of another witch hunt. Because of this accusation, things get even worse for the two women who have to be careful as to what they say and defend their actions.

Being accused of being storm bringers is one of the worst crimes possible.

Storm Bringers are people who call forth or summon storms to cause pain and suffering, death. If convicted of it, the sentence is death. You really see what happens when the fear of the unknown sets in or even being different can happen. Isolde and her friend find themselves in a perilous situation to say the least.

They have to fight some very harmful accusations and people are very much out to get them. I want to see how the new villain is going to interact with the two women. We also get a surprise that is a welcome one. I really want to read the next book in this series. Rating: 4. Disclaimer: I received a free edition of this book from the publishers as in conjunction with a Goodreads giveaway. Ok, now I've got that out of the way, let's get on with the review. As you can see from my rating, I thought that this book was ok. As with the previous book in the series, it is a quick and easy read.

Also, I love the character of Freize - he is, in my opinion, the standout best thing about this book.

Hey, would you like to hide this kind of warning in the future?

He is such a likable character, which makes me wish that he was the main character. In fact, I would love it if he and Ishraq teamed up and went off on their own to solve mysteries. What I didn't like.